Joy Against the Rain

Joy's story was the first I wrote for The Adventure Project. It was nine months into our first year, and while we were gaining traction, it wasn't without a few bumps.

Thankfully, our hunch to start The Adventure Project was right: there were a lot of people who shared our values of creating sustainable change with jobs, not aid. We focused on grassroots giving. About 1,700 people joined us that first year, raising a modest, yet respectable, $130K. While the traction was there, I felt strongly that we shouldn’t be paying ourselves until we raised more or received a few bigger grants.

By August, I had personally run out of money and maxed out my two credit cards.

Jody suggested we ask our core friends to contribute monthly to our operations. Like the stubborn fool that I am, I urged us to forgo salaries and just focus on building our partnerships on the ground. In retrospect, Jody’s idea was the right one, per usual. Jody: 1, Becky: 0.

My lease was up, so I put my stuff in storage and spent the next ten months living on friends' couches. I blogged about where I stayed, which you can see here, but it turned into one of the best years of my life. I learned how to ask for help. Most importantly, I learned firsthand how good people are. Sometimes I had multiple people asking me if I needed somewhere to stay. I spent a lot of time rolling my suitcase, a printer and my coffee maker (necessities) through a sea of strangers from subway to subway. But thanks to my hosts, I never felt alone.

And thanks to our work, I’ve always felt privileged and blessed. It’s an honor to do the work that I do and to meet the entrepreneurs we work with. One of those women is Joy.

I had just met her in Uganda when a reporter at Bloomberg sent me a DM on Twitter, sharing that the Peace Corps was looking for stories for a contest. The winning entry would win $5K. The fine print read that while they preferred you were a Peace Corps member, they couldn’t discriminate if you weren’t one.

I made a cup of coffee and wrote this story below. And I won.

But driving over the muck and debris, it was hard to tell. The streets were so waterlogged, we eventually had to get out of our car and walk.

Kawempe is a slum situated in the lowest point of Kampala, the bustling capital of Uganda. When it rains, Ronald told us, all the water ends up here. With the water comes all the sights and smells of human waste, making it a prime spot for disease to fester, I imagine.

Winding through this vast network of small homes requires the balance of a dancer. You must squeeze through alleys and dodge puddles of muck and sewage. Children dart past, kicking a dirty soccer ball made of rags, laughing and poking fun at one another.

Irene told us, as she bounced 7-month-old Faith on her knee, that when it rains at night her family doesn’t sleep.

“That's our bed, over there, Irene said, pointing to a large foam mattress, slumped over two chairs to dry in the sun.

Rain means their home floods with a few feet of water.

Irene told us that it rained on Saturday.

If you’re living on one dollar per day, thriving is nearly impossible. We asked Joy, a health care promoter for Living Goods, about her experience here.

Years ago, Joy’s husband had been stationed in the army. He died fighting in Rwanda. He left her widowed with a toddler, a baby and pregnant. Thus began the period of her life she called “survival.”

SHE WALKED 10KM TO A CHARITY OFFERING SCHOLARSHIPS FOR THE CHANCE TO ENROLL HER THREE KIDS IN SCHOOL.

Her walking paid off but only for one child. To eat, a kind neighbor who was HIV+ forged his test results in her name, so she could register at a clinic for free food. She traveled around Kampala and registered herself at five.

“I have always been skinny, so everyone believed that I had HIV,” she says, raising her forearm and gently circling her wrist with her index finger and thumb, so they touch in the middle. She was ashamed, but with three young children, she was desperate. For shelter, Joy and her children took refuge in an old storage container. The space was so small, she couldn't stretch out her legs at night. 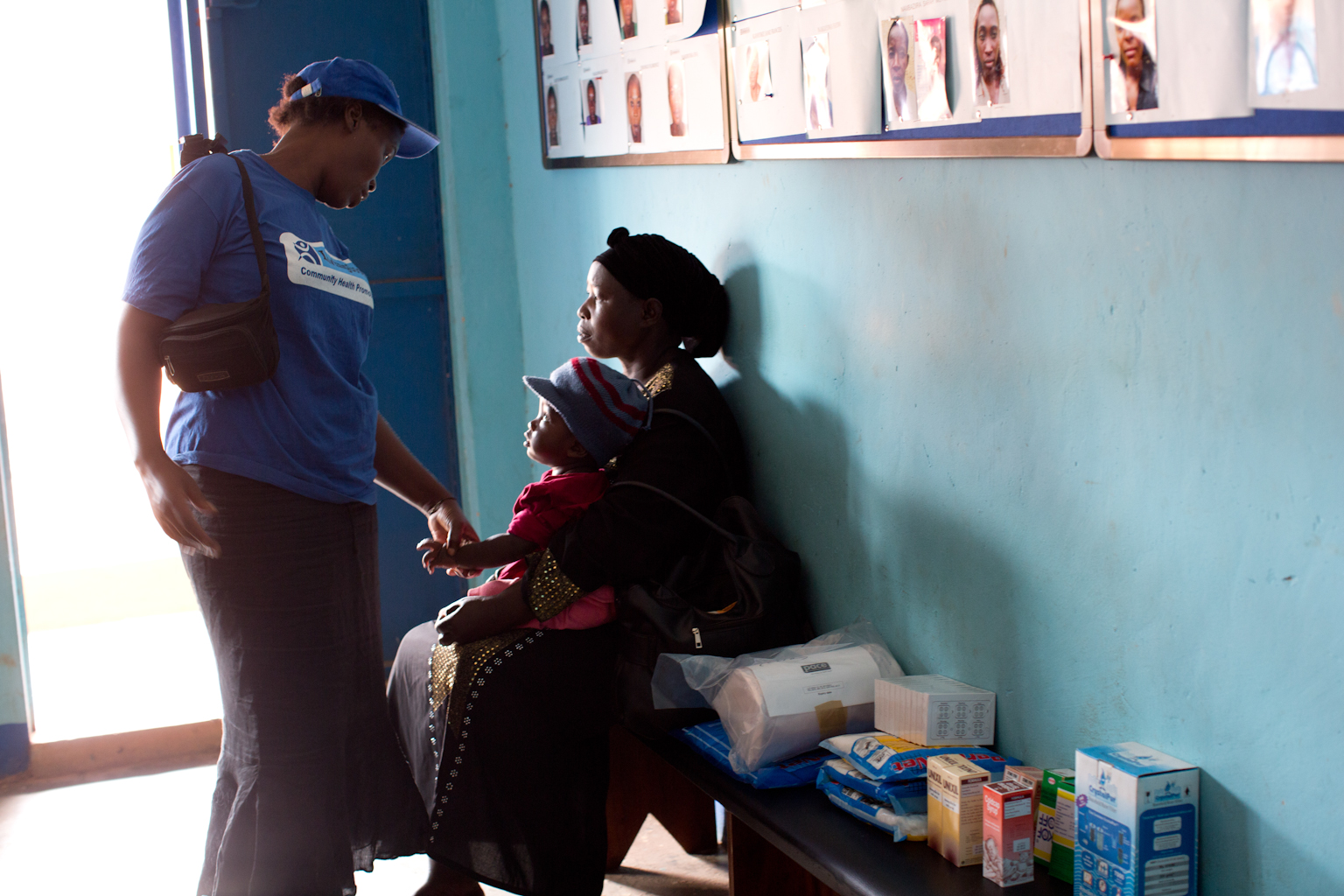 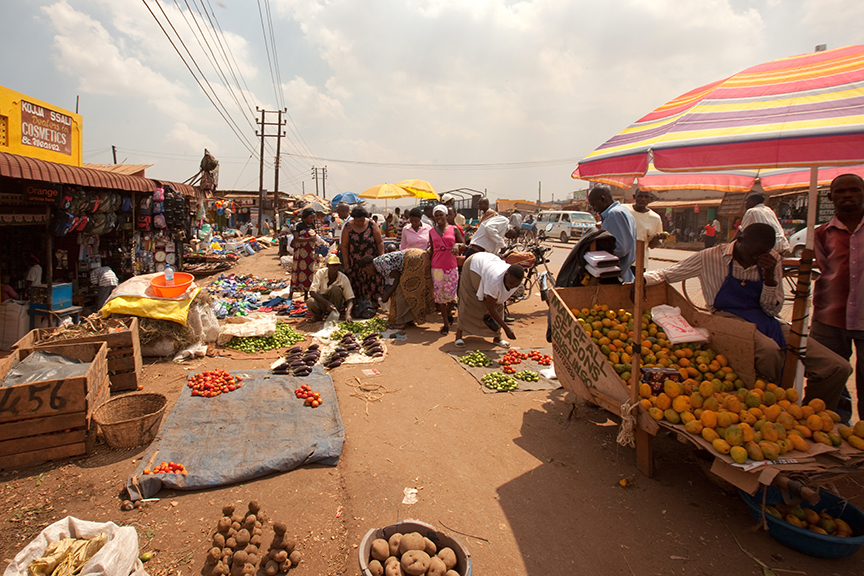 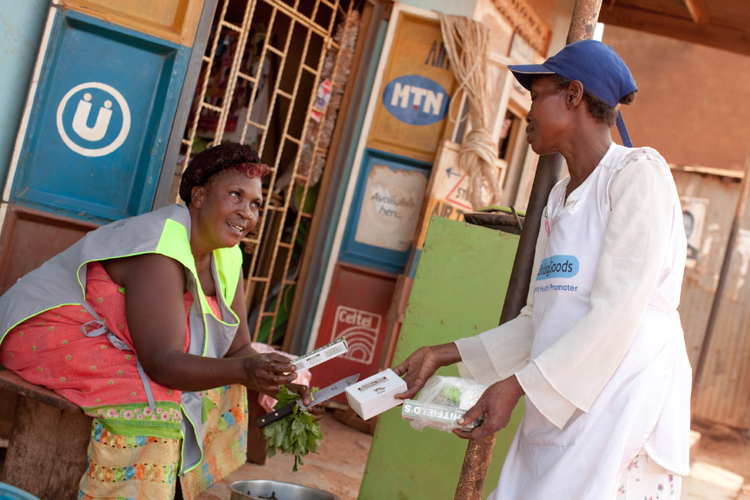 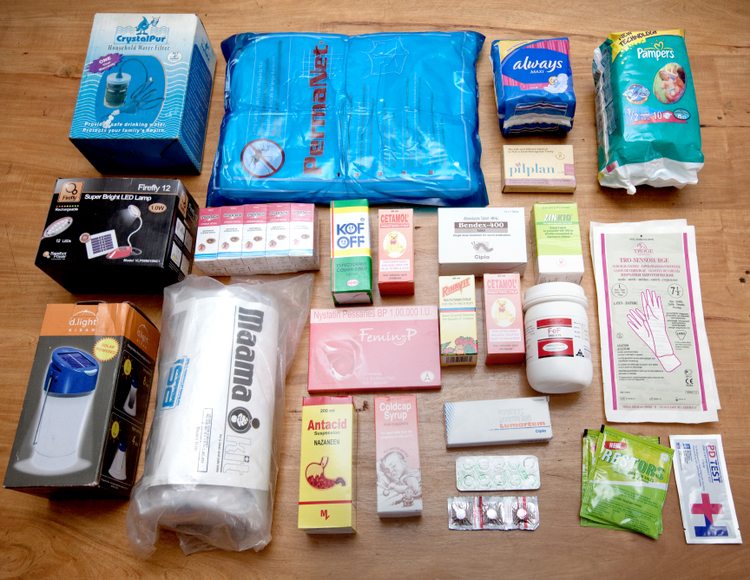 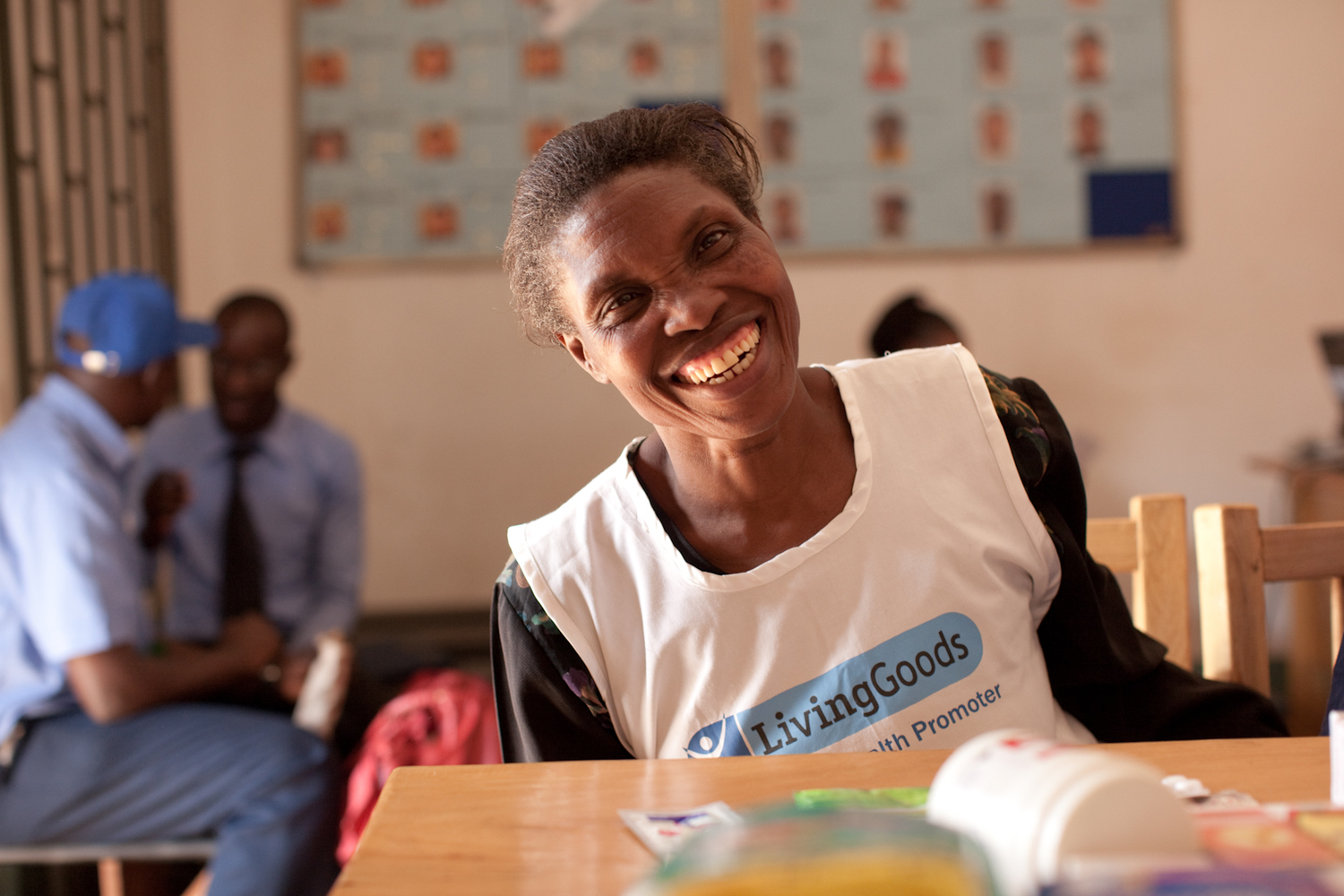 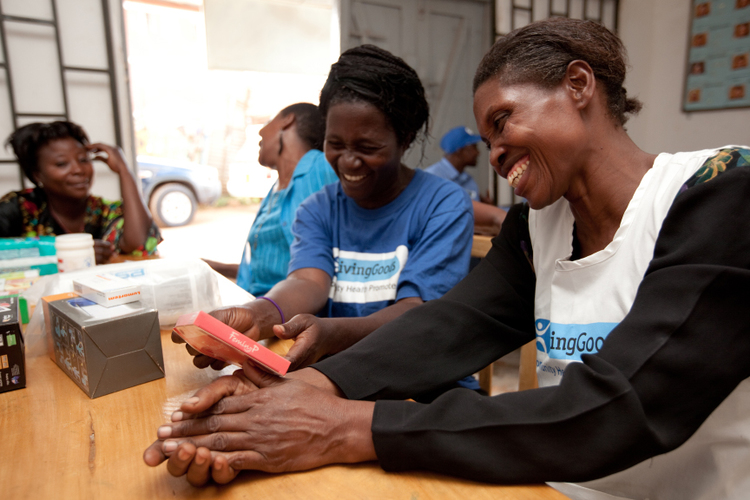 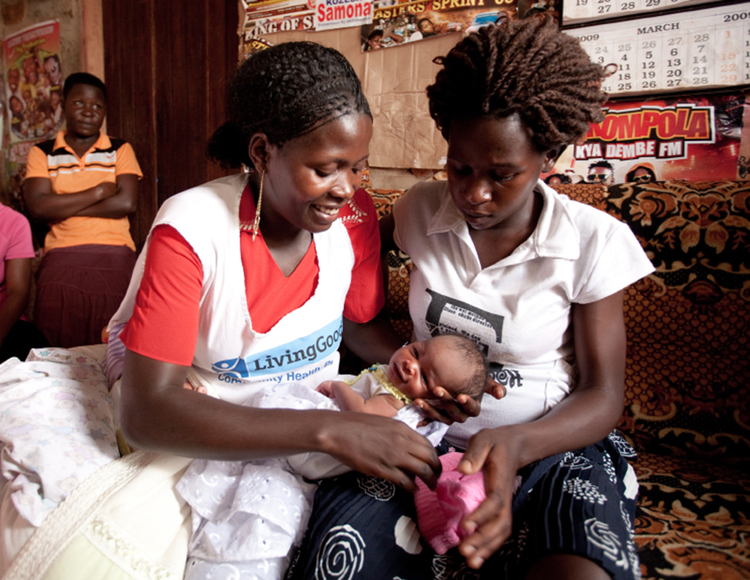 It wasn’t long before big wet tears rolled down her cheeks. Joy methodically used her wide thumbs to wipe them away. One on each side, in a steady rhythm. Like fat drops of rain on a window, I thought. She didn’t sniffle or heave. They just poured out.

Every 3 seconds a child dies in the developing world because of a lack of access to basic health products – simple medicines that cost less than a cup of coffee.

Approximately 270 million people in Africa lack regular access to essential medicines. Furthermore, retail prices of medicines in Africa are often marked up and sold for 350% of the manufacturing costs, due to fragmented markets of resellers and a nonexistent supply chain.

Starting in Uganda, Living Goods trains female leaders in their communities to become health promoters, going door-to-door selling essential health products at affordable prices. Women earn commission off every sale, and each micro-entrepreneur serves a catchment area of 800 people. They provide expectant and new mothers with sound advice, house calls and referrals. Because Living Goods operates a strategic network of branches, they have a streamlined supply chain, selling their drugs 10-40% below market pricing.

We sat outside with Joy and sipped our Cokes.

The sky looked ominous and the upper branches of a tree rustled loudly in the wind. Ronald, Joy’s supervisor, assured us that it wasn’t going to rain.

Joy told us the story about how she earned a job at Living Goods, because she was nominated as a leader in her community, an older mother people trust. She applied, took the health test, and was accepted. How has her life changed, we asked? Joy straightened up and spoke passionately.

“(Before) I could live in a tiny room and not look at myself. I could just go to market and not think about myself. You don’t bother looking for yourself. Nobody knew me,” she said.

"Musawo is a Lugandan word for someone who treats people. I would like to keep that dignity when I go out of my home. I changed my life totally to fit with that name, Musawo,” Joy said, assertively, eyes beaming.

“It has changed my life.”

Despite the rain, the waste and the disease plaguing the Kawempe slum, there’s a beacon of light. Because there, among the muck, you can now find Joy.

I've always loved data and research. But I've never been one of those great, fast-talking, excitable entrepreneurs with the super-slick marketing messages and elevator pitches. I will never be good on Shark Tank. But here's what I can tell you:

Years after I wrote this story, Living Goods revealed in a random-controlled study that having one Community Health Worker in a village reduces child mortality rates by 27%. In my "industry," that's historic. Literally, life-saving.

I've stayed in touch with Joy and visited her last summer ('19). She asked that we meet her at her grandson's private school, where she's proudly paying 50% of his tuition. She could never quite help her own kids through school; I think she wanted a picture with him.

If you are a The Adventure Project supporter, I hope I convey the weight and value of your donations, so you feel it, too. Your support is doing measurable good, in incalculable ways.

You helped a mother (now grandmother) move out of a storage container. She's now the hero in her community. And most importantly, she feels it, too.