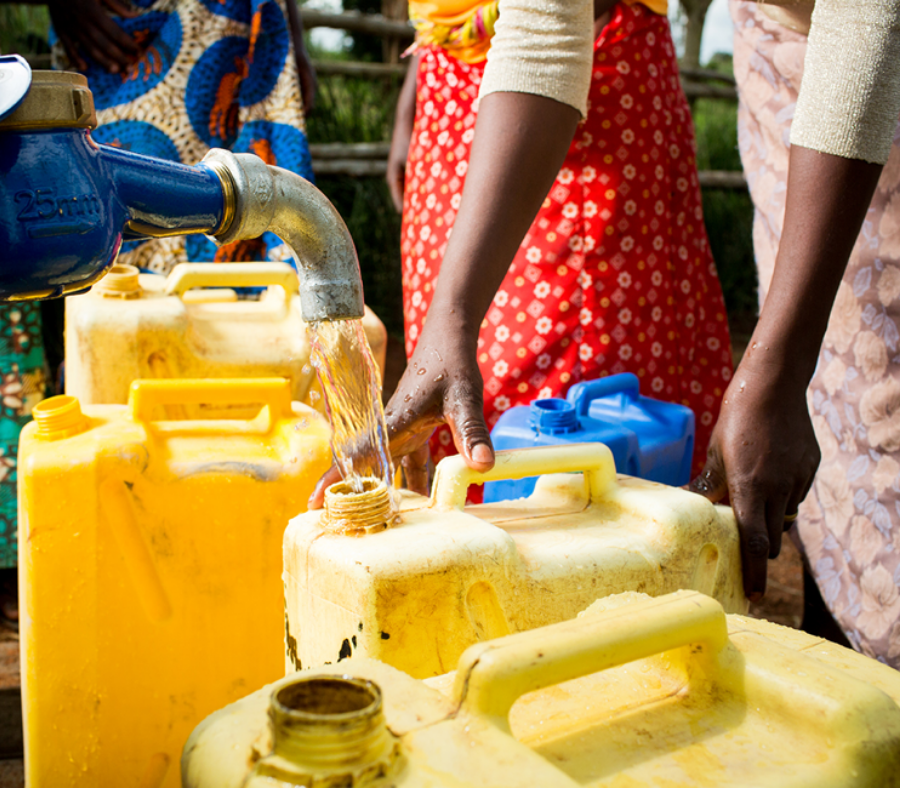 A Decade of Giving Water for Christmas

Tesi Klipsch's understanding of the water crisis was changed on her first trip to Ethiopia.

In 2008 my husband and I were traveling to southern Ethiopia to see where our son, Tariku, was born. We left at the crack of dawn and as the sun rose along the horizon, my husband and I were baffled by what we saw. To us, it looked like a massive yellow bus, moving in slow motion, along the side of the road. As the sun crept higher, we realized it wasn't a bus at all.

It was people, women and children mostly, with yellow jerry cans on their heads, walking miles to collect water.

When we arrived at our destination I asked the interpreter about the water situation. Though it was rural Ethiopia, it wasn’t what some picture when they think of sub-Saharan Africa. There were roads and big buildings, commerce and hotels. And still, when our guide showed us the water source, I couldn’t wrap my head around it.

It was a pond, right next to a broken well, with only standing, contaminated water. I was told the well was built by a church years before but only worked for a few months so the community was forced to go back to the pond for water.

The visual of a broken well next to a dirty pond where livestock and humans drank from the same source has never left me.

I left vowing to do something. I didn’t know what, but I knew if I could make other parents see what I was seeing, they would be just as energized to force change and save lives.

I happened to go to church with a woman named Jody Landers who herself was adopting twins from Sierra Leone and knew intimately of the water crisis as well. We, along with a few other women in our church, decided to tackle the water crisis that Christmas. We invited our church and blog followers to “give water for Christmas”. Our goal was to build one well, costing $5,000 at the time, by Christmas.

This was the first time the power of small gifts adding up to massive change hit me. The power of a small group of people dedicated to changing the lives of people they’d never meet, just because it’s the right thing to do. And the power of changing the story of the holidays. Away from consumerism and gifts towards leveraging our purchasing power for good. For life-saving good.

By 2010 my husband and I returned to Ethiopia to adopt two more boys and the water crisis hit us even closer. Our older son’s spine was damaged from carrying full jerry cans for miles when he was young and his bones were not yet done growing. Our younger son contracted malaria from drinking dirty water and, as a result, had been sickly for months.

We returned to America and Jody called me again. This time to tell me about an adventure she was starting with Becky Straw. The Adventure Project was going to tackle the issue that had been weighing on me for years and they were going to do it in the most sustainable, creative way. They were going to hire well mechanics to fix broken wells, ensuring not only that the community once again had access to clean water but also that the well mechanic entrepreneurs would have access to a job! A job that would allow them to feed their families and send their kids to school. Jody asked me if I wanted in. Though I had five small children at home and we were living on my husband’s nonprofit salary, I said yes without hesitation.

The water crisis and its effects, not only on my beloved sons but also on the world, have remained with me these last 12 years. So much so that my sister-in-law, Leslie, and I held an event every November to raise critical funds for the crisis, much of it going to The Adventure Project. In the 10 years we held The Water Party, we raised over $300,000 for clean water solutions.

I believe we were able to accomplish so much because we understand that women shouldn’t have to walk miles for something so basic. Kids should be playing at school, not walking for water. People shouldn’t die because of a lack of access to the most basic need. Agencies shouldn’t come in, drill a well, and then never return. These are basic truths understood by everyone we’ve shared our story with.

This November, I proudly joined the team at TAP as our Online Engagement Consultant, throwing my experience and expertise into making sure as many people as possible hear about the great work we are doing (thanks to the tremendous help from all of you).

‍You can help ensure heroes around the world have access to help those most vulnerable to extreme poverty today.

This Christmas, I once again find myself asking you to give water for Christmas. To join me in chipping away at the world water crisis. Because of our partnership with Aqua for All, every donation you make is not only tax-deductible, it’s also DOUBLED up to $50,000!

Today my kids are growing and thriving teenagers. I believe every child should get the same opportunities, in their own countries, as mine have here. Their parents should have access to quality jobs, families shouldn’t be lined up for days at a broken well and no one should die because of a lack of access to clean water.